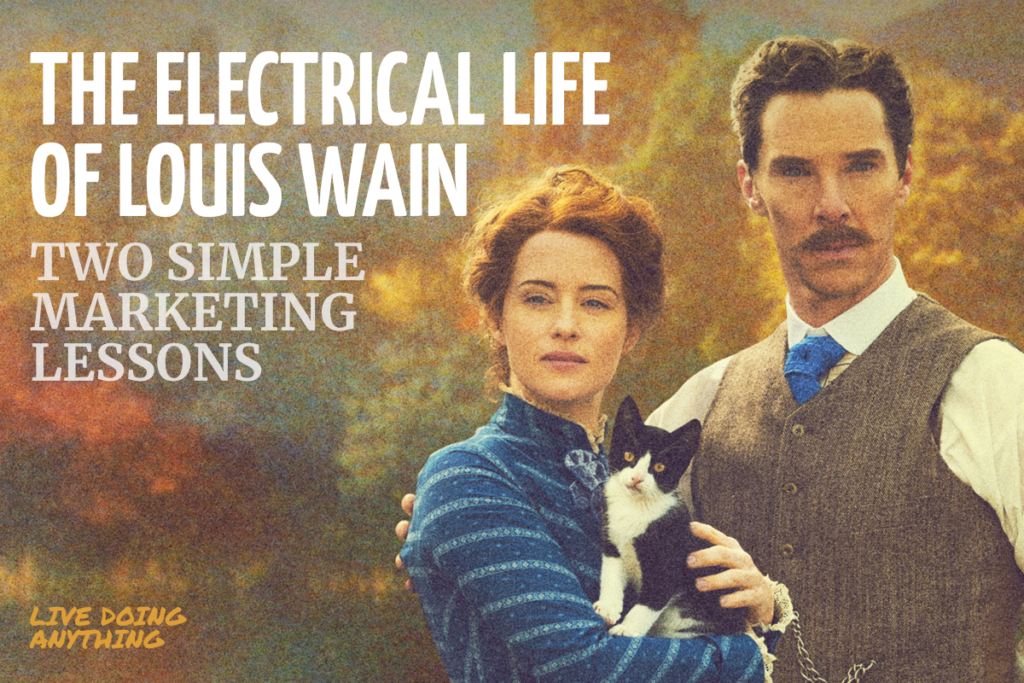 A few days ago Amazon Prime added “The Electrical Life of Louis Wain” to my recommended list. It featured Benedict Cumberbatch in the role of an eccentric illustrator drawing weird-looking cats, so of course, I had to watch it.

The movie has nothing to do with marketing, and as we learn watching it, Louis Wain was definitely not a savvy freelancer. Wikipedia recites:

“Despite his popularity, Wain suffered financial difficulty throughout his life. He remained responsible for supporting his mother and sisters and had little business sense. He was modest, naive, easily exploited, and ill-equipped for bargaining in the world of publishing. He often sold his drawings outright, retaining no rights over their reproduction. He was easily misled and found himself duped by the promise of a new invention or other money-making schemes.”

Despite that, he has become extremely known and loved. And as someone whose goal is to help people make a living doing what they love, I had to ask myself: how has that happened? (Okay, maybe I didn’t have to, but give me a break here.)

In this article, I’ll use the movie as an excuse to introduce and provide examples of a few important marketing concepts. I won’t delve into the details of the movie’s story so, if you were wondering, don’t worry: this is a spoiler-free article.

In fact, you’ll be able to follow along with the article even if you haven’t seen the movie, and its lessons will prove useful to any kind of freelancer, not just illustrators. Now let’s dive in.

Marketing lesson #1: The importance of positioning

In the marketing world, positioning a product or service means highlighting the few aspects that make it different (in a significant way) from each of the other alternatives in the market.

For a freelancer, positioning means developing what we could call “a personal style”. Generally speaking, the more specific and recognisable the style is, the better.

Louis Wain started his freelancing career by drawing common animals and landscapes. Thanks to his talent he’s been successful from the beginning, but his fame didn’t flourish until he started focusing on the subject and style he later became famous for: humorous, anthropomorphic cats.

Why did his style work?

“Throughout history, cats have been worshipped as mystical gods and maligned as the evil allies of witchery and sin. But I think you’re the first person ever to see that they are, in fact, ridiculous. They’re silly and cuddly. And lonely. And frightened and brave. Like us.” — Emily Richardson

It all started when Louis and Emily found a stray cat, Peter, and decided to keep him as a domestic animal— something unthinkable during his time.

As Emily points out in the movie, Louis managed to do something that everybody else hadn’t done: he brought a new, fresh perspective on a common subject. And that’s how successful marketing almost always begins: with a noteworthy product or service.

In the “Purple Cow”, Seth Godin talks exactly about that. If you were driving and saw some cows on the side of the road, you’d probably disregard that information pretty quickly and never tell anybody. But what if one of those cows was purple? And that’s exactly what happened: Louis drew “purple” cats.

When Emily told Louis to show his cat drawings to some editors, Louis told her that “[nobody] would want to see a picture of a cat.”

We often make assumptions about how people will perceive our work, but those assumptions aren’t always right. Showing the work is a big obstacle when developing a personal style, because when you go to the edges looking for your Purple Cow, things might not work.

Luckily, Emily managed to convince him and he showed his drawings to Sir William Ingram, proprietor of the Illustrated London News, who appreciated what he was doing and commissioned a narrative drawing of a “Kitten's Christmas Party”. It contained 200 cats, took 11 days to complete and according to Wain brought him overnight fame. [source]

The evolution of his signature style

In the beginning, Louis drew more “normal” cats: unclothed and on all fours. First of all, drawings of anthropomorphic animals were already very popular in Victorian England and were commonly found in prints, cards and satirical illustrations like those of John Tenniel.

Wain's illustrations often parody human behaviour, satirizing fads and fashions of the day. He wrote, "I take a sketch-book to a restaurant, or other public places, and draw the people in their different positions as cats, getting as near to their human characteristics as possible. This gives me doubly nature, and these studies I think [to be] my best humorous work."

I don’t think he actually worried himself with such problems, but if you’re trying to innovate, this reflection could make all the difference. Is your audience ready for what you have for them?

Louis started from a very specific place: the Illustrated London News. It’s the readers of the journal who talked about it, who showed his works to their friends.

But Louis didn’t really have to pick a niche: making something innovative for the masses was much easier then. Can you imagine a world where nobody drew cute cats?

I’m not saying that’s impossible, but if you’re trying to make your own purple cow right now, you’d better start smaller. You’d better start from a niche. Targeting a niche (or specific genre for your style) will make everything easier for you. It will be easier to find them and please them, and cheaper to reach them.

What kind of people could your personal style resonate with, and where can you find a group with those characteristics?

And then keep going

Once you’ve found the group, you need to reach them consistently. Few success stories don’t have this element in them.

Louis Wain produced as many as several hundred drawings a year, and he illustrated about 100 children's books. (As the narrator from the movie described it, “a quite extraordinary quantity of cat pictures”.)

Developing a personal style, building trust and recognition, are all things that take time. If you’ve already taken care of the rest, you’ll simply need to commit. In a few years, the one they’ll think about when they need taco-shaped musical instruments is gonna be you.

Cultural change (or: The unexpected consequences of drawing cats)

Wain was involved with several animal charities, including the Governing Council of Our Dumb Friends League, the Society for the Protection of Cats, and the Anti-Vivisection Society. He was active in the National Cat Club, and served as its president and chairman. He felt that he helped "to wipe out the contempt in which the cat has been held" in England.

It’s impressive how his vision and persistence actually managed to change the culture among the people who followed him (and eventually, everyone else). Just by making illustrations.

Seth Godin talks about defining “the change” your marketing is supposed to bring when done successfully.

The change can be small or secondary, but it could also be the starting point for the development of your personal style: if Louis Wain decided he would have drawn cats to normalise the way the world viewed them, I imagine that would have worked, too. (Although something tells me he wouldn’t have had this kind of strategic approach.)

What will you be known for?

If you’re a freelancer, that’s an important question to ask yourself. It’s okay if you don’t know yet, but it pays to start experimenting as soon as possible. Pick your edge, show your work, be consistent.

If you’re interested, some time ago I have recorded a few interviews with some illustrators who talk about, amongst other things, the development of their personal styles.

I have also written a small e-book guide to “Freelancing Full Time”. My view about the topic has changed a bit since I wrote it, but I believe it could be a valuable introduction to marketing and entrepreneurship for freelancers.

By signing up, you’ll also start receiving content such as this one in your inbox: short stories, tools and resources to help you apply the marketing concepts to your own situation and make a great living doing what you love.

Hope you’ve enjoyed the read, I’ll see you in the next article. Toodles 👋

A short guide to freelancing full-time

If you're looking for some guidance, here's where I think you should start from. It's a free guide containing some of the most important concepts you'll need in order to make a living doing what you love. Subscribe to the newsletter to receive it in your inbox!